After the hype we (@splinter_code and me) created with our recent tweet , it’s time to reveal what we exactly did in order to get our loved JuicyPotato kicking again… (don’t expect something disruptive 😉 )

We won’t explain how the *potato exploits works, how it was fixed etc etc, there is so much literature about this and google is always your best friend!

Our starting point will be the “RogueWiRM” exploit.

In fact, we were trying to bypass the OXID resolver restrictions when we came across this strange behavior of BITS. But what was our original idea?

“(…) we found a solution by doing some redirection and implementing our own “Oxid Resolver” . The good news is that yes, we got a SYSTEM token! The bad one: it was only an identification token, really useless “

So what was our idea in our previous experiments?

So we abandoned the research until some days ago, when two interesting exploits/bugs had been published:

On a late evening of some days ago, @splinter_code sent me a message:

(@splinter_code) “If we resolve the fake OXID request by providing an RPC binding with  our named pipe instead of the TCP/IP sequence, we should in theory be able to impersonate the NETWORK SERVICE Account and after that… SYSTEM is just a step beyond…”

And guess what? IT WORKED!!!

Let’s dig into the details.

First of all a  little bit of context on how the OXID resolution works is required to understand the whole picture.
This is how the flow looks like, taken from msdn : 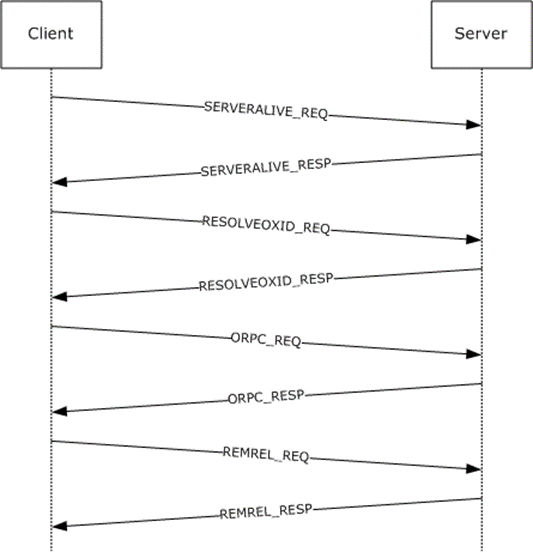 The client will be the RPCSS service that will try to connect to our rogue oxid resolver (server) in order to locate the binding information to connect to the specified dcom.

Consider that all the above requests done by the client in the OXID resolution sequence are authenticated (RPC Security Callback) impersonating the user running the COM behind the CLSID we choose (usually the one running as SYSTEM are of interests).
What *potato exploits does is intercepting this authentication and steal the token (well technically is a little bit more complicated because the authentication is forwarded to the local system OXID resolver that will do the real authentication and *potato will just alter some packets to steal the token… a classic MITM attack).
When this is done over the network (due to the MS fix) this will be an Anonymous Logon so quite useless for an EoP scenario.

Our initial idea was to exploit one of the OXID resolver (technically called IObjectExporter) method and forge a response that could trigger a privileged authentication to our controlled listener.

Looking at the scheme above 2 functions caught our attention:

So the first request was not of our interest because we couldn’t  specify endpoint information (that’s what we needed) so we were always answering with a response of RPC_S_OK. This is an example of what a standard response looks like:

So we focused in the next one (ResolveOxid2) and what we saw is something interesting that we could abuse:

Observing the above traffic, that is a standard response captured on the real OXID resolver on a windows machine, we quickly spot that we could abuse this call by forging our own ResolveOxid2 response and specify as an endpoint our controlled listener.
We can  specify endpoint information in the format ipaddress[endpoint] and also the TowerId (more on that later).

So our idea was to implement a whole OXID resolver that would answer always with our listener binding for any oxid oid it will receive, just a Fake OXID resolver.

Let’s analyze the function ResolveOxid2 to understand how to forge our response:

What we need to do is to fill the DUALSTRINGARRAY ppdsaOxidBindings with our controlled listener.
Well that was a little bit tricky, but it is well documented by MS (in 1 and 2) so it was just a matter of trial and errors to forge the right offsets/sizes for the packet.

Let’s recap, we can redirect the client to our controlled endpoint (aNetworkAddr) and we can choose the protocol sequence identifier constant that identifies the protocol to be used in RPC calls (wTowerId).

There are multiple protocols supported by RPC (here a list).

In the first attempt we tried ncacn_ip_tcp, as TowerId, that allows RPC straight over TCP.
We run an RPC server (keep in mind that a “standard” user can setup and register an RPC Server) with the IRemUnknown2 interface and tried to authenticate the request in our SecurityCallback calling RpcImpersonateClient.
Returning ncacn_ip_tcp:localhost[9998] in the ResolveOxid2 response, an authentication to our RPC server (IRemUnknown2) were triggered, but unfortunately was just an identification token…

So that was a dead end… But what about “Connection-oriented named pipes” ncacn_np ?

First of all what is the “epmapper” ? Well it’s related to the “RpcEptMapper” service. This service resolves “RPC interfaces identifiers to transport endpoints”.  Same concept as OXID Resolver, but for RPC.

The mapper runs also on TCP port 135 but can also be queried via a special named pipe “epmapper”.

This service shares the same process space as the “rpcss” service and both of them run under the NETWORK SERVICE account.  So if we are able to impersonate the account under this process we can steal the SYSTEM token (because this process hosts juicy tokens)…

The first try we gave was to return a named pipe under our control in the ResolveOxid2 response:

But observing the network traffic the RPCSS still connected to the \pipe\epmapper . This is because, by protocol design, the named pipe epmapper must be used, and this is obviously a “reserved” name:

When we read the PrintSpoofer post we were impressed by clever trick of the named pipe validation path bypass (credits to @itm4n and @jonasLyk) where inserting ‘/’ in the hostname will be converted in partial path of the named pipe!

With that in mind we returned the following binding information:

And you know what? The RPCSS were trying to connect to nonexistent named pipe \roguepotato\pipe\epmapper :

Great! So we setup a pipe listener on \\.\pipe\roguepotato\pipe\epmapper, got the connection and impersonated the client. Then we inspected the token with TokenViewer :

So we had an Impersonation token of the NETWORK SERVICE account and also the LUID of the RPCSS service!

Why that? Well, the answer was in the post mentioned above:

” if you can trick the “Network Service” account to write to a  named pipe over the “network” and are able to impersonate the pipe, you can access the tokens stored in RPCSS service“

All the “magic” about the fake ResolveOxid2 response is happening in this piece of code:

Perfect! Now we just needed to perform the old and well known Token Kidnapping technique to steal some SYSTEM token from the RPCSS service.

We setup a minimalist “stealer” which performs the following operations:

Probably you are a little bit confused at this point, let’s do a recap. Under which circumstances can I use this exploit to get SYSTEM privileges?

You can find the source code and POC of RoguePotato here.

Final note: We didn’t bother to report this “misbehavior?” to MS because they stated that elevating from a Local Service process (with SeImpersonate) to SYSTEM is an “expected behavior”. (RogueWinRm – Disclosure Timeline)